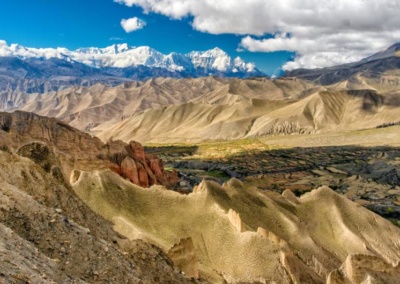 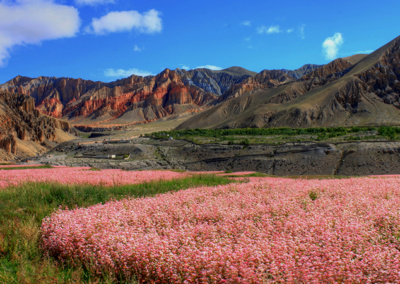 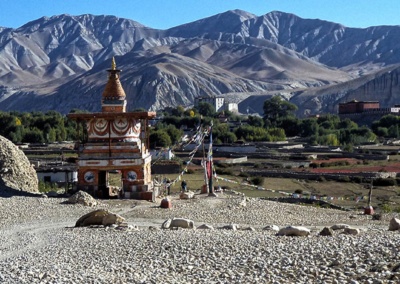 Around Annapurna via Thorong Pass

Around Annapurna via Tilicho Lake

Upper Mustang Trek – 19 Days
Mustang is an ancient Himalayan Kingdom which lies in the northern central part of Nepal and at the top of the Kaligandaki River. Upper Mustang consists of two distinct regions: the southern part and the northern where the languages, culture and traditions are alike to those of the Tibetan people. This area is consider as one of the most interesting and picturesque places in Nepal. The whole area has an isolated and mystical feel to it, enchanting and inspiring visitors to this region.

The trek to Lo-Manthang is through high altitude desert country climbing in and out of the huge sided valley of the Kali Gandaki. In places the gorge which the Kali Gandaki River runs through is the deepest in the world. This region is full of some of Nepal’s oldest Buddhist Monasteries, ancient and isolated villages with quaint white washed houses.

Day 03 : Kathmandu Pokhara. Drive from Kathmandu to Pokhara (915 m.) which takes about seven hours. This road is newly paved and is now one of the finest in Nepal! Immediately, you head up as you climb out of the Kathmandu valley, only to quickly descend again to the Trisuli River, which you follow upstream to its junction with the Marsyandi River. You follow the Marsyandi gently up through heavily terraced fields and small hill towns to the Seti Gandiki River that takes you directly into Pokhara. Pokhara is a beautiful city with pleasant weather. It is renowned for its touris’s paradise. This city is full of natural as well as cultural heritage sites such as lakes, caves, temples of Buddhist and Hindus along with mountains. As you approach the city, there are wonderful views to the north across the hills and Phewa Tal (lake) to the white peaks of the Annapurna and Dhaulagiri ranges. This drive will take most of the morning, leaving much of the afternoon for a relaxing boat ride on Phewa Lake, shopping in the markets and shops, or just relaxing with a drink on the shores of the lake.

Day 04 : Pokhara To Jomsom (Fly)and trek to Kagbeni(2810m) Fly from Pokhara to Jomsom (2700 m.) and it takes about 25 minutes and trek from Jomsom to Kagbeni (2810 m.) which takes about four hours. You take the spectacular early morning flight to Jomsom. After some initial preparation of loads, you begin your trek to the beautiful village of Kagbeni. Just out of Jomsom you cross a suspension bridge and then walk along the riverbank of the Kali Gandaki. The trail is quite barren with craggy rocks and sand and is mostly flat, which makes it very easy going. It is also very picturesque, with views of big peaks all around such as Dhaulagiri, Tukuche and Nilgiri, whilst to the south can be seen the entire Annapurna Massif. Kagbeni provides you with a taste of scenes to come in upper Mustang, with its narrow alleyways and tunnels, irrigation canals, green fields of wheat and barley and a large red gompa.

Day 05 : Kagbeni To Chuksang(2900m) Trek from Kagbeni to Chuksang(2900 m.) which takes about five hours. You trek right up the river valley, but you use a combination of the high trail and the riverbank pathways. The trail then widens significantly revealing an endless stretch of sand but the path is kept interesting by the passing of mule trains bearing goods from Mustang and Tibet. On the west bank of the river are some caves and Gompa Kang. Unlike most monasteries in Upper Mustang which are of the Sakyapa sect, Gompa Kang is of the Nyingmapa sect. You stop for lunch at the village of Tangbe, where you come across the first black, white and red chortens that typify Upper Mustang. The little town is a labyrinth of narrow alleys among white washed houses, fields of buck wheat and barley and apple orchards. Nilgiri Peak continues to dominate the southern skyline. Chusang village is only about 2hrs walk beyond Tangbe at the confluence of the Narshing Khola and the Kali Gandaki. There are three separate parts to this village and some ruined castle walls on the surrounding cliffs. Across the river from Chusang are some spectacular red organe pipe eroded cliffs above the mouths of some inaccessible caves

Day 06 : Chuksang to Samar(3150m) Trek from Chuksang to Samar(3150 m.) and it takes about three and half hours.
There is a distinct change here, not only in the topography, but also in the culture, lifestyle and people, and the settlements become more scattered, smaller and more basic. The people of Lo or Mustang do practice agriculture, but because of the lack of rain and fertile soil, cultivation is in sheltered plots of land, scattering the brown landscape with patches of green. Continuing north, you reach a huge red chunk of conglomerate that has fallen from the cliffs above, forming a tunnel through which the river flows. A steel bridge spans the river just in front of the tunnel and north of here the Kali Gandaki becomes impassable on foot. The trek now leaves the valley and climbs steeply up a rocky alley to the village of Chele. Watch out here for the ferocious Tibetan mastiffs which are chained to many of the houses. From Chele you climb a steep spur and then continue ascending along the side of a spectacular steep canyon to a pass. Beyond the pass you descend on a pleasant trail to Samar, situated in a grove of poplar trees. This is a major stopping place for horse and mule caravans

Day 07 : Samar to Geling(3510m) Trek from Samar to Geling (3510 m.) which takes about five hours. You climb above Samar to a ridge and then descend into a large gorge past a chorten before entering another valley filled with juniper trees. You then cross a stream and after climbing to a pass, you descend along a ridge to Shyangmochen a tiny settlement with a few tea shops. Nearby is Rangbyung, a cave containing stalagmites which have formed in the shape of chortens and one of the holiest places in Mustang. The trail climbs gently from Shyangmochen and you enter another huge valley before descending to Geling with its extensive fields of barley. As in all the settlements of Mustang, the white and ochre-painted houses are constructed using mud and stones, with roofs made of twigs, straw and a mixture of mud and pebbles.

Day 08 : Giling to Ghami(3490m) Trek from Giling to Ghami (3490 m.) via Ghami La (3520m.) and it takes about five hours. From Geling the trail climbs gently through fields, up the center of the valley, passing above the settlement of Tama Gun and an imposing chorten. You then begin a taxing climb across the head of the valley to the Nyi La [3840m]. The descent from the pass is quite gentle and about half an hour further on we come to a trail junction; the right trail is the direct route to Charang, the left trail leads to Ghami. Ghami is a large white-washed village sheltered by overhanging cliffs.

Day 09 : Ghami to Tsarang(3620m) Trek fram Ghami to Tsarang (3620 m.) which takes about five hours. Today’s walk is through perhaps the driest part of Mustang, and much of your energy will be spent negotiating loose, dry soil. However, the magnificent views of the countryside, from the gentle contours of the north to the rugged mountains in the east and west, are a source of inspiration. Finally, you come to Charang, a large spread-out village at the top of the Charang Chu canyon. At the eastern end of the village is a huge dzong [fortress] and a red gompa which houses an excellent collection of statues and thangkas.

Day 10 : Tsarang to Lo Manthang(3730m) Trek from Tsarang to Lo-Manthang [Mustang](3730 m.) and it takes about three hours. You will spend part of the morning exploring the interesting village of Charang and its large monastery, before setting out for Lo Manthang. You climb gently above the valley to a large isolated chorten that marks the boundary between Charang and Lo. The trail then broadens and eventually you get our first view of the walled city of Lo Manthang. The city has only one entrance so you circumambulate the wall to the gate on the north east corner.

Day 12 : Lo-Manthnag to Ghami(3490m) Trek from Lo-Manthang to Ghami (3490 m.) which takes about six hours. You continue your journey on the highland route, crossing alpine meadows before dropping down a steep eroded alley to Dhakmar for lunch. After lunch, you walk through the pretty valley, climb to a ridge and descend from there back to Ghami

Day 14 : Chuksang to Muktinath(3795) Trek from Chuksang to Muktinath (3795m.) which takes about seven hours. The trail follows gently ascend and winding path passing through almost desert like places. On the way, you see at a distance some agricultural fields, apple orchard and some human settlements. You can enjoy beautiful deserted landscape, Caves, old Tibetan Style Villages, apple Garden, Yaks Herds, Sheep Herds, straight up to the Muktinath, visit Monastery believed to be built in 15th century, walk about twenty minute to Muktinath Temple, where you can enjoy a holy bath of 108 Taps, Visit Monastery, Natural flaming and Hindus Temple. The people of Muktinath are close to the life style, culture, religion and idea of Tibetan people.

Day 15 : Muktinath to Jomsom(2713 m) Trek from Muktinath to Jomsom (2713 m.) and it takes about five hours. Easy day, trail gradually ascends to Eklebhati at Kali Gandaki River valley, walk another two hours along the wide sandy and windy valley. The way moves between two hills.

Day 16 : Jomsom Pokhara (fly) Fly from Jomsom to Pokhara which takes about 35 minutes. The flights are available during the morning time. The strong breeze blows during the after and frequent change of the weather prevent the flight being landed and taken off in the afternoon. During the flights in morning, the sky looks very clear which makes you able to enjoy the splendid views of different mountain peaks.

Day 17 : Pokhara Kathmandu. Drive from Pokhara to Kathmandu and it takes about seven hours. Arriving Kathmandu transfer to hotel on BB basis.

send an inquiry about this trek